Rosario Salerno is one of the artists whose work is featured on Tarot-Tshirts.com. He’s a Sculptor and Comic author based in Berlin. Sculpture is his main medium to work with but he also creates comics, having written and drawn his first comic book, “Until The Daylight” in 2012 and now his Tarot deck. Tarot-Tshirts.com caught up with Rosario to ask him about Tarot, his inspiration and Berlin.

TT: When did you first become interested in Tarot?

RS: I think the very first time I came across a deck of Tarot cards was when I was about 13 years old. I remember that my sister received a deck of the major arcana as a gift and she was trying to read them. There was a manual inside and we thought that studying the manual would mean that it was going to be easy to read them…! I was really attracted to the drawings and the names and I was really into the symbolic, classic, archetypal nature of them.

I loved doing it, the fact that it was for me at the time a bit magic

TT: Why did you decide to make your own Tarot?

RS: For many years after that episode I stopped as I was sort of religious at the time. I remember I was forbidden by my priest who said they were an instrument of the devil..! So I stopped. It was hard to throw that deck away, as I loved the drawings and I loved doing it, the fact that it was for me at the time a bit magic, something that can tell you meanings. After I got rid of that deck, for a long time I just forgot about Tarot, until late last year, when it happened to me to talk with someone about Tarot and they reminded me how much I liked them. I immediately thought it would be a cool idea to draw my own Tarot deck.

TT: Who did you meet that reminded you about Tarot?

RS: It was a journalist who interviewed me about my art work. After seeing some drawings of mine, she said that my style was reminding her her own Tarot deck, which she has been reading for the last 25 years.

TT: Was this in Berlin?

RS: Yeah in Berlin at the end of 2014. When she said that my drawings reminded her of the major arcana, something like a bell rang in my head and I thought this would actually be a very nice project to do. Also, it would force me to draw a lot which is always a good training. I thought it would be a great chance to draw and to work on a theme that I’m very interested in.

TT: Can you tell me the main characteristics of your Tarot deck?

As I tried to make my version of Tarot respecting all the original symbols, colors and details that there are in the classic Tarot of Marseilles, I looked a lot at the restored Tarot by Jodorowsky and Camoin as they investigated a lot the oldest decks found. However, for making my own deck unique, I adapted it making them stylistically closer to my drawing style. As final result, I’d say they’re a contemporary version of the classic Tarot of Marseilles, as I tried to use some modern symbols that could fit with our contemporary world. For example, the Tarot of the Fool, which classically is represented by the court jester with a dog who is pulling down his pants. With my personal interpretation and taste, I adapted this to something more contemporary: a punk character. Also because the meaning of the card is about free energy, free from any idea of rules and establishment, so I thought this representation of the card as a punk or a character a little on the edge of society would be suitable.

TT: Can you give me another example of a modern symbol you used?

RS: Yes, another example is the House of God tarot. This card is also known as “The tower”. Some of this card’s meanings are an explosion, a sudden “opening”, a temple, a revelation of your inner god, a party, a moment of joy and celebration, even an orgasm. For these reasons, in this case, in order to give this card a contemporary aspect, I decided to reference this card to the techno club Berghain here in Berlin. In my tarot, the face of the building is referencing the architecture of Berghain, which is actually considered a temple of sorts itself. Certainly for Berliners it can represent a place of celebration, so I thought it would have been suitable to use for the card.
Like all tarot cards, it can also be interpreted in a negative way. So I preferred to call it the House of God, like in the original Tarot of Marseilles deck is called “La Maison Dieu”, also in opposition to the mostly negative meaning associated to the name “The Tower”. This is because I believe Tarot should be viewed more in a positive, optimistic way rather than in a negative way. 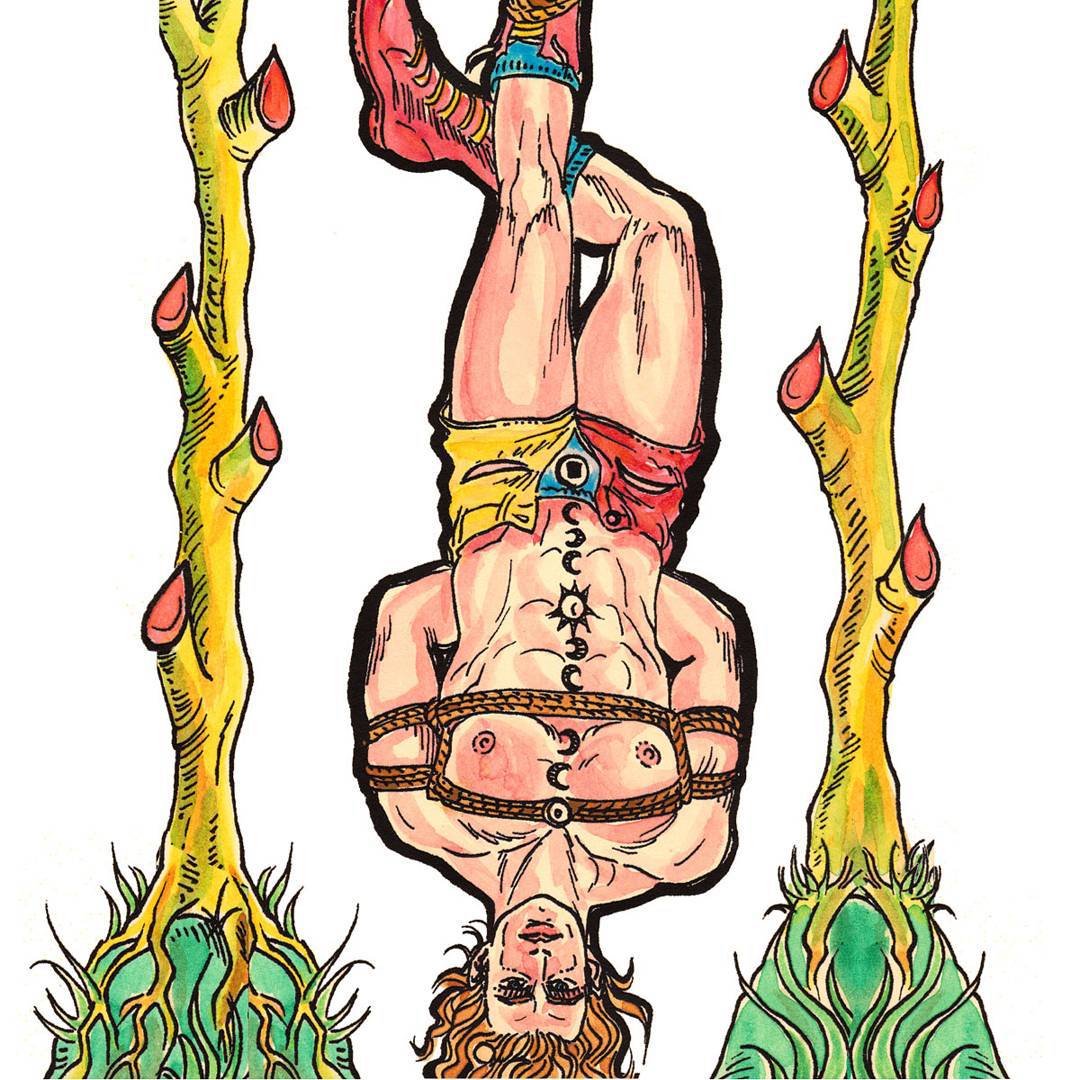